Make your own city…there’s an app for that

Perhaps I’m a traitor to my generation, but I just never got excited about smart phones…or Twitter…or any of the multitude of inexplicable new social media “apps” my friends keep telling me about.  I’m one of the last hold-outs among my 20-something peers that is still using my “dumb” phone, blindly walking around the world without the ability to broadcast my whereabouts to all my friends at any given moment.

My techno-aversion left me ill-prepared to answer a question posed by participants at our last outreach series: How will mobile technology affect our cities?  Will our ability to work and socialize from anywhere on the planet eventually render the traditional city obsolete?  Instead of interacting with and supporting their community in the real-world, will the Millennial generation spend all their time building up their online Farmville (Full disclosure: I’m pretty sure Farmville is a game, but I actually have no idea what’s going on there)?

As it turns out, our youthful obsession with the internet may be making our real-world cities more relevant and vibrant.  According to a 2009 study by the Pew Research Center, social media users are more likely to belong to a local voluntary association, such as a neighborhood association, and just as likely to interact face-to-face with their neighbors as non-users.  In the same study, certain types of internet use were associated with increased visits to public spaces like parks, and increased likelihood to know one’s neighbors.  A host of popular online sites – like Meetup, foursquare, Craigslist, and occasionally Twitter and Facebook – actively encourage interaction offline by linking you to like-minded souls nearby.  Founder of the social media site Pinterest summed it up nicely at last year’s Thinc Iowa conference, describing his site as a place “where people can connect and inspire each other to get away from the computer to do something offline.”

Community-focused internet tools like those mentioned above allow people to have a more meaningful real-world experience by personalizing the world around them.  In a sense, users can form their own city by using social media to pull together the pieces that matter most to them.  Let’s say you’re a telecommuting bird-watching enthusiast with a love of Bosnian food.  You may live in Norwalk for the small town feel, jet up to Johnston for a hike with the local Audubon Society you found on Meetup, then check foursquare to find out where your Des Moines friends are having Pljeskavica tonight.  With these new tools, people can more easily engage with their communities in ways that match their personal interests and passions.  A recent Cornell University study concluded that using social media in this way makes the urban environment seem less “anonymous” and encourages participation in the public realm.

Obviously, there are still many of us that don’t use mobile technology to connect with their environment (like this techno-stunted author, for example).  But, for those worried about our collective civic future in the hands of the increasing hordes of smart-phone-addicted youth, ease your fears.  The internet is not creating a generation of reclusive web surfers that will abandon the needs of their communities; it’s giving our cities more personal meaning and value by providing a new avenue for citizens to engage in their communities.  Building value in innovative ways is crucial to the long-term sustainability of any enterprise, including our cities. 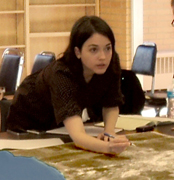 Lorin Ditzler is an urban planner for RDG Planning & Design in Des Moines. She may one day get a smart phone. Maybe.
This entry was posted in Exchange. Bookmark the permalink.