In case you were too busy outside enjoying all the beautiful weather to notice, the price of corn is rising. The typical concerns over summer floods in Iowa have gradually transitioned this year to worry over drought conditions that are threatening the viability of Iowa’s corn crops, the largest in the nation. As a result, corn prices have shot up almost 50 percent since June as the drought continues to expand its footprint.

Optimistically speaking, Iowa’s corn crops are less affected so far than in other states such as Missouri, Illinois, Indiana, and Kansas. If this week’s lower temperatures remain in place and even moderate amounts of rain fall in the next few weeks, Iowa farmers may actually come out ahead if their crops succeed and high prices hold due to failed crops elsewhere.

On the other hand, consumers will lose no matter what given the impacts that corn production and pricing has on so many other commodities. The cost of meat and poultry will increase since corn is essential to their diets. The price of gas will go up along with the price of ethanol. The cost of packaged foods, soda, and many other food products that contain either corn or corn syrup will increase. These increases in food and gas prices will tend to hit the lower end of the tax bracket the hardest at a time when the economy recovery is beginning to show some life. And, if increased costs cannot be passed along to the already budget-minded consumer, restaurants and businesses are at further risk of going under if consumer confidence declines.

There are also other potential impacts of the growing corn crisis that are less obvious. For example, if Iowa’s corn crop survives, that could be good for real estate: assuming agricultural land in Iowa retains or increases its value, than the amount land available for development (and sprawl) goes down and everyone else’s land values go up as well. Conversely, if the value of Iowa farmland takes a hit due to a poor corn crop, so will the value of everyone else’s land. Therefore, land development patterns in Iowa in the future could be significantly altered based on the outcome of this drought.

But perhaps the most interesting potential byproduct of the current corn situation may be the upcoming presidential election. Iowa is an important battle ground state for Obama and Romney. If the Iowa corn crop survives, then the local economy will remain strong which history says is good for the incumbent. A bad crop and a bad local economy favor Romney, because people will be hungrier for change. And in the end, what happens in the elections could affect the way in which federally-funded projects like The Tomorrow Plan are implemented.

So, there you have it – the weather over the next few weeks, and the impact that it has on this year’s corn crop, could impact many of the factors being considered in the long range regional plan for Greater Des Moines: social equity, land values/housing affordability, economic development, transportation costs, agricultural land conservation, and governance. Behold the power of corn…the next few weeks could have a profound impact on the future of the region. 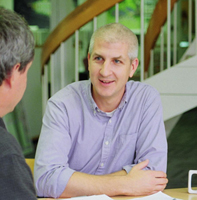 James Miner is a planner with significant national experience in mixed-use real estate development, new communities, urban districts, and long-term strategic and physical planning for institutions and higher education campuses. He is currently the Director of Planning and Urban Design at Sasaki Associates and the Principal-in-Charge of The Tomorrow Plan.
This entry was posted in Exchange. Bookmark the permalink.