Natural Playscapes – a new but critical link to the great outdoors

Blogger’s Note: Just last week the Polk County Conservation Board (PCCB) celebrated the grand opening of its Bison-Elk Plaza and observation deck – a natural outgrowth of the adjacent natural playscape referenced below. Congratulations to The Tomorrow Plan partner PCCB for its work in “leading you outdoors.”

Natural Playscapes – a new but critical link to the great outdoors

“They splash for slithering tadpoles, tip-toe to observe butterflies, and set up mini-track and field for beetles in the sand,” says naturalist Lew Major. “They learn things about themselves that they don’t even know they’re learning and learn in ways traditional schools aren’t teaching.”

Major animatedly refers to the children experiencing the Jester Park Natural Playscape in Northwest Polk County.  The Playscape has won multiple awards as one of the first-in-the-nation efforts to reintroduce children (and their families) to the great outdoors. It attracts kids and adults of all stripes far and wide. Major conceived of the ground-shaping idea and brought it to life with the help of RDG Planning and Design and a number of public and private partners. 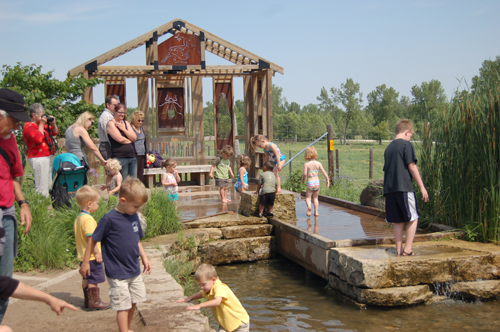 What is a natural playscape? Major is clear. “It’s a place where kids play unstructured, unsigned, and where they’re not told what to do. It is free, creative play in a natural setting, not in a classroom or on manufactured equipment.”

Why would such a space matter?

The public is losing touch with the great outdoors. Children on-average enjoy a mere 4-7 minutes of unstructured time outdoors each day.  At the same time, the American Academy of Pediatrics says 60 minutes of such play is “essential to children’s physical and mental health.”

No surprise, the costs of sedentary living are on the rise. In past years, the Iowa Department of Public Health has estimated nearly $1 Billion in annual health costs due to sedentary lifestyles. That obesity has catapulted as a health issue in this country is no secret and according to the U.S. Surgeon General:

“Physical activity . . .  is essential for health at any weight.”

Nature needs advocates. Advocates rarely surface in the abstract. Their voices are strongest when rooted in beloved places. When play in the outdoors declines, those loving protectors may lose numbers and impact as well. According to researchers Pergams and Zaradic:

“The greatest threat to conservation . . . may be more subtle than bulldozers and chainsaws . . . direct experience with nature is the most highly cited influence on environmental attitude and conservation activism.” 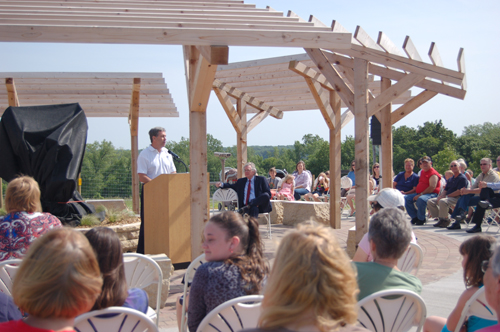 Enter Natural Playscapes – a transition back to the great outdoors.  Natural playscapes allow free play in a stimulating earth-focused context– reaping many of the benefits of children unleashed in the great outdoors. But here, the situation has a bit more control and security for parents.

Major says the natural playscape’s strength is in its ever-dynamic experience that comes for free. “We don’t pay for the dragonfly larvae. I don’t pay for the butterfly to cross here and land on the milkweed so the kids can chase it. I just watched a kid herding a beetle for twenty minutes. That’s the way creative minds are nurtured.” 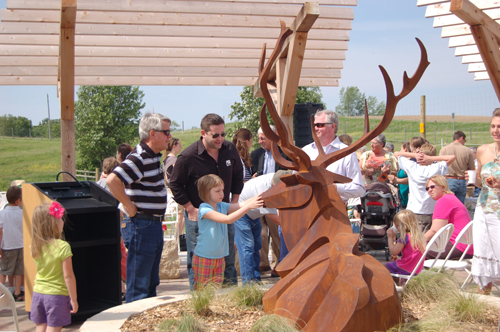 Don’t feed the animals, but feel free to pet the art! – part of the Bison-Elk Plaza at Jester Park.  Photo: Mike Bell

Pat Boddy, Mike Bell, and Scott Crawford of RDG Planning and Design are all key contributors to the Jester Park Natural Playscape. In collaboration with the PCCB, the team designed the Playscape to be sustainable in all senses – socially, economically, and environmentally. Pat Boddy has also been working as part of the consulting team for The Tomorrow Plan since the project’s kick-off and was director of Polk County Conservation when the Natural Playscape concept was developed.
This entry was posted in Exchange. Bookmark the permalink.