Think what could be achieved if private business and government worked together in a partnership to re-define a community.  In October 2012, I spent three weeks as a John J. McCloy Fellow in Urban Affairs over in Germany.  A striking accord we four U.S. Fellows realized was the working partnerships between private business and government organizations.   Partnerships were woven into almost every aspect of the community, in big metropolitan cities like Berlin and Hannover to smaller cities like Wismar and Magdeburg.   There was almost no service area untouched, too.  Private/public partnerships existed in the energy sector, education, trade skills, manufacturing, housing and social programs.

Some may say be careful in blurring the line between private enterprise and government.  We have all recently heard the debate from the Washington D.C. beltway that it has to be private business or the government that pulls this country forward.  I ask why one or the other?  The Tomorrow Plan has started a conversation that could change this discussion.   Currently, many governments work together on shared services, often by 28E Agreements.  Those agreements allow governments to share resources and services based on the section of Iowa Code 28E, that allows governments to have joint exercise of governmental power.   As a matter of fact, the Metropolitan Planning Organization (MPO), which is the owner of The Tomorrow Plan, is such an organization created by a 28E Agreement.  Actually, the same Iowa Code (28E) used for governments to partner together allows governments and private business to partner together too.

Expanding that partnership into private business and non-profit organizations would only increase the collective ideas to solve some of the biggest (and smallest) challenges facing the community.  The partnerships in Germany are different from what U.S. partnerships could be.  Often, a City is a majority or minority shareholder in a private business, in exchange for funding or property.  In exchange that private business has a government as a major shareholder and that private business funds government operations.  This partnership works in Germany because of the German culture, laws and attitude toward government.  Government in Germany can often be heard of as “father government.”  Government is not seen as the impediment to success, but the nurturer of success.  This is a stark contrast to U.S. cultural perception, that government is a necessary structure that should not grow too large, or a necessary evil to be banished.  Regardless of what side of the Atlantic or U.S. political debate you fall, the underlying take away is that by working together both partners benefit.

The mutually benefiting partnership is really about learning and sharing ideas.  It is about mobilizing the collective ideas, looking at problems from a different view and asking questions. The power is then taking those ideas and questions to make changes to achieve success.  Both win.  The standard operation in the U.S. today to address issues is for governments to fund or grant money to an organization, non-profit or business.  In turn business funds (grants or employee donations) money to an organization, non-profit or government to solve an issue.  Sounds good, right?  Maybe, but all that is shared is money.  The business, non-profit or government don’t come together to share ideas, ask questions or learn what each could do to make the service more efficient.

The Tomorrow Plan can start the seed for these types of partnerships to grow.  It will be a challenge.  It may seem too large or too complex, causing us to become overwhelmed, but “When you have a great and difficult task, something perhaps almost impossible, if you only work a little at a time, every day a little, suddenly the work will finish itself,” Isak Dinesen (pen name of Karen von Vlixen-Finecke). 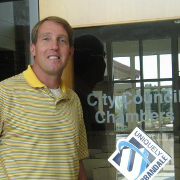 John Konior is the Assistant to the City Manager for the City of Urbandale. He focuses on policy analysis and development along with grant writing and management. He also serves as a team leader in safety, energy efficiency, and special projects. Recently, Mr. Konior has worked to further the City’s safety and wellness campaign.
This entry was posted in Exchange. Bookmark the permalink.