A big part of planning regionally is listening to people from all corners of the study area.  Public meetings provide one forum for this—click here to see what we heard at the Future Fair in early August—and more and more, the internet provides another.  Over 200 people have submitted ideas, posted comments, and voted on their preferences on The Tomorrow Plan’s MindMixer site since it opened in January. 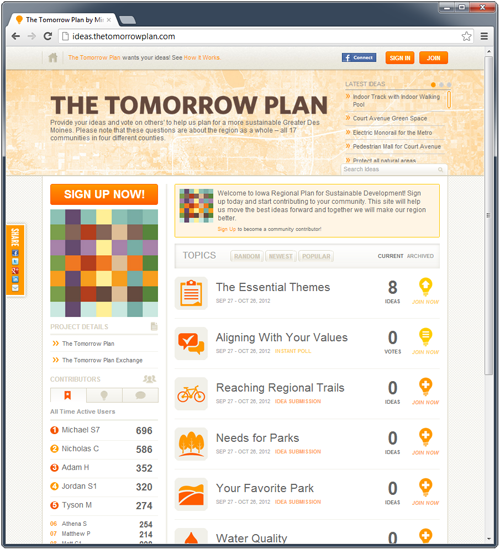 We are pretty excited about what we’ve heard and are ready to take the next step of integrating many of these citizen ideas into the final plan.  The Tomorrow Team will be weighing options, considering ideas in the context of overall regional goals, and assessing feasibility to determine how to move forward with the many suggestions.  Just to give you a flavor of what we are hearing, some of the most popular ideas on the MindMixer site so far include:

And there are always more good ideas out there!  Take this opportunity to add your voice to the mix.  Go to http://ideas.thetomorrowplan.com to let us know what you think about parks, trails, and water.  Topics of conversation change every couple weeks so check back often so you don’t miss any!

This entry was posted in Exchange. Bookmark the permalink.